For decades, helicopters have played a key role in aerial application in farmlands and forests across the US for pest control, crop treatment, frost prevention and firefighting operations.

In recent years, however, aerial applications have grown substantially as a result of the advent of new corn fungicides designed to be applied at tassel. Also advances in helicopter technology enable more timely, efficient, and effective crop protection product applications that have much more limited environmental impact than ground approaches.

Craig Bair, aerial SSRE manager at Wilbur-Ellis Co., advocates the use of aerial applications given their ability to treat many more acres per day than ground rigs and to provide expansive applications in crowded treatment windows when weather/soil conditions are unfavorable. Aerial applications also minimize crop damage and soil compaction, according to Bair.

With corn crops, Bair says research shows that fungicide applications made at the VT stage by air work more effectively because the product is dispersed to the upper half of the plant, resulting in better ear development.

Dr. Scott Bretthauer, pesticide safety extension specialist with the University of Illinois, has observed a yield increase of 18.6 bushels per acre with an aerial application of fungicides, and Dr. Gary Fellows, tech service fungicide and seed treatment has reported average increases of 12.8 bushels. 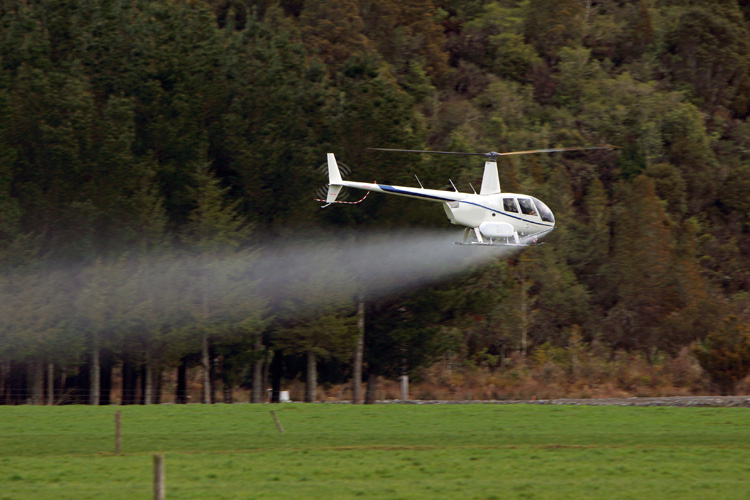 The Role of Helicopters in Aerial Applications

One of the main reasons to use helicopters in an agricultural environments is to gain access to tight areas. It is is often difficult or impossible to spray with airplanes, but helicopters are more user-friendly since they can stay within the limitations of a field and dispense with the need to turn over roads and houses.

“You can have a good visual of the traffic going up and down the road and you can circle around until the traffic is clear then hit the pass along the road where there is no impact on the vehicles,” said Glenn Martin, VP of Helicopter Applicators, Inc. in Gettysburg, Penn. “You can make those short clean-up passes along the tree lines, as well as make sharp turns and follow the confines of the field boundary. This makes it a complete job when you use the helicopter in these kinds of areas.”

GPS has been a encouraged helicopter aerial application, now that 99% of pilots use it for navigation, according to a National Agricultural Aviation Association (NAAA) survey.

Recently, several advances in mapping software has enhanced the ability of helicopters to tie orders to georeferenced fields. Operators are able to create job maps prior to applications and download them onto memory sticks for pilots to load in the computer in the cockpit.

AgSync, a new web-based Internet hub is being actively used by retailers and aerial firms in the Midwest for order management. Once a project is set, the company sends the plan via GPS systems to helicopters. There are currently more than 600 retail locations using the service and more than 40 aerial applicators are connected.

Experts say there is a bright future for aerial applications given that agriculture products are booming globally. Andrew Moore, executive director of NAAA, says that growing populations and middle classes are demanding meat daily, which correlates to the demand for corn for feed. Growers are now using helicopters to apply corn fungicides by as commodity prices continue to rise.

Also, chemical manufacturers are specifying products, such as herbicides and fungicides for aerial applications.

Contact Fairlifts at 1-800-318-8940 for More Information on Helicopter Aerial Applications for Agricultural Areas!